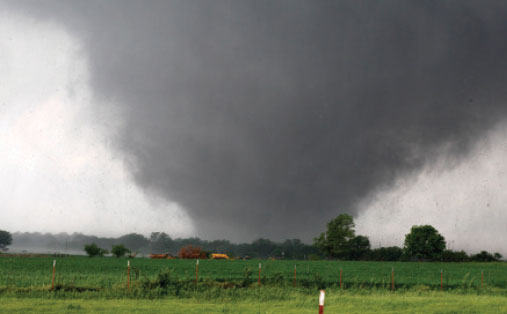 On May 20, a deadly tornado tore through the suburbs of Oklahoma City. Picking up strength as it sped toward Moore, Okla., the twister unleashed 200 mph winds on nearly 4,000 homes, offices and other buildings across five counties, cutting a path 17 miles long and 1.3 miles wide. In just 40 minutes, it took the lives of 24 people and injured 377 others. In the weeks since the tornado, countless inspiring stories have emerged: of people ushering neighbors and strangers alike into underground shelters, of families reuniting and of communities vowing to rebuild. In the following paragraphs, Melaleuca Marketing Executives share their experiences with the devastating Moore tornado.

Running for Their Lives
Executive Director Michael Ivery lives several miles from Moore, but his daughter Micah and granddaughter Gabriella live within blocks of the area that sustained the most damage. When Michael offered to pick them up early on May 20, Micah was confident that she and her daughter would be fine. But as the warnings became more urgent, she called Michael for help.

“I was immediately on the road to pick them up,” Michael says. “The rain was getting heavier, and as I exited the freeway onto the frontage road, the hail started coming down like something out of a movie. I got to Micah’s apartment, and that’s when the siren sounded a citywide warning that the tornado was coming our way. It was a bone-chilling sound.

“Micah jumped into the back with Gabriella, and we took off, listening to the radio so I could navigate to safety. Just as we drove beyond Moore, we saw the tornado. We were literally running from it, and I praise God that we stayed on the ground.”

Finding Family in the Aftermath Director II Angelina Patterson was with her 8-year-old son at an appointment when the tornado touched down. She had her 3-year-old daughter in tow, but her oldest son was at his high school and her foster daughter was in daycare.

“There was nothing I could do,” Angie remembers. “The tornado was heading straight toward them, but school officials weren’t letting any of the children leave school at that point. I kept calling the school and the daycare, but I couldn’t get through because the power was out.”

When the winds died down, Angie ventured onto the roads to reunite her family. Her usual 20-minute route across town was strewn with debris and clogged with traffic. At one point, she had to drive three miles in the wrong direction to find a gas station that had power.

Meanwhile, Angie asked her husband, Ronnie, to pick up their daughter from daycare; because the streets were blocked off, he had to park and walk several blocks to get there. Along the way, Ronnie helped others dig through the rubble, looking for survivors. Near a 7-Eleven® convenience store that had been ripped off its foundation, Ronnie uncovered a 4-month-old baby who had been killed with his mother, and he cradled the child’s body before paramedics took him away.

“Ronnie will never forget that—he was really shaken up,” Angie says. “And we still had to find a way to get to our oldest son. Because of the traffic and everything else, we picked him up after 10 p.m. and we finally got to a hotel around midnight. It was a crazy day.

“Our house was still standing, thank goodness, but we didn’t have power and the roads were blocked so we couldn’t get home anyway. Still, we were fortunate compared to many others. My heart goes out to everyone who lost so much.”

“So many people lost everything they owned,” Executive Director VIII Vicki Pember says. “We just wanted to give them a little ray of hope.”

The Marketing Executives distributed kits in the area that was most impacted. As they neared the site, they remember gasping with disbelief—images on the news hadn’t prepared them for the wreckage they witnessed with their
own eyes.

“We just couldn’t believe the devastation,” Executive Director II Barbara Burditt says. “We saw a car wrapped around a tree, houses that had been turned to debris and families who had lost everything. The people who accepted our kits just hugged and thanked us in gratitude.”

As they distributed kits, the group offered comforting words and support. They prayed with those still recovering, hugged families who miraculously survived and heard inspiring stories of sacrifice and selflessness.

“I was hoping to have a small impact on other people’s lives, but really they had a big impact on my life,” Senior Director VIII Kim Oliver says. “I’ll never forget that experience.”

In addition to being inspired by the tornado victims, the Marketing Executives were impressed by how many individuals came from across the country to volunteer.

“There are a lot of heroes in this story,” Executive Director VIII Merrill Pember says. “It’s remarkable to see people strengthening each other during such a tragedy, and we were grateful to contribute in some small way.”